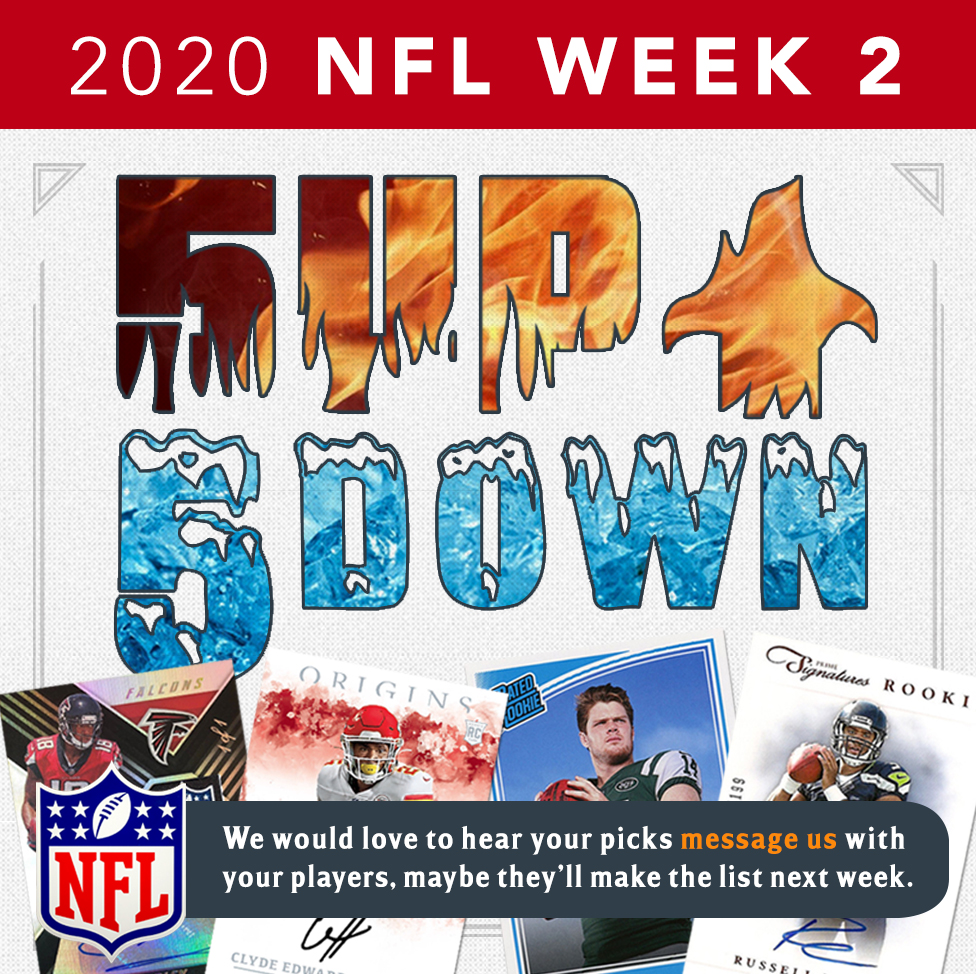 1. Russell Wilson – Pete Carroll certainly “Let Russ Cook” in a high scoring Week 1 victory over the Atlanta Falcons. The MVP candidate (though did you know Wilson has never received a single MVP vote?) may enjoy his best season as a pro if the Seahawks continue the trend of chucking it. Wilson’s rookie prices have skyrocketed over the last 6 months, but if he puts together an MVP season, the prices will shoot up even more and I like the chances for collectors to profit off him.

2. Mitchell Trubisky – Left for dead by card collectors after a miserable 2019 season, Mitch put up 3 TDs in an upset over the Detroit Lions. Can he continue to hold off Nick Foles and reward collectors who invested in him this off season? Time will tell, but the window is still open to make a few bucks off the Bears QB. Maybe try to do it before Week 2? ¯\_(ツ)_/¯

3. Josh Jacobs – I LOVED Josh Jacobs heading into the 2020 fantasy football season. He is one of the few running backs with minimal competition, which means exactly what you saw on Sunday… #POINTPOUNDING. Not only was he active down near the goal line, but the promise that he would have a role as a receiver out of the backfield came true. Jacobs saw 6 targets and caught 4 balls for 46 yards. All of these were career highs. The arrow is pointing up for the 2nd year running back.

4. DeAndre Hopkins – Were you one of the people that thought DeAndre Hopkins was damaged goods after he was traded from Houston? If so, boy were you wrong. All DeAndre did was open the season against one of the toughest defenses in the league and record a career high 14 catches for 151 yards. He would have had 152 yards and a TD, but the refs reversed a call and said he was down at the 1. Jerks. DeAndre’s card prices have a chance to jump into the Michael Thomas stratosphere if this high-end production continues.

5. Calvin Ridley – Ridley was a favorite of many to break out in 2020 after an injury riddled 2019 season. If Week 1 has told us anything, he may end up living to that hype. The 3rd year receiver finished with a stat line of 9/130/2 and is looking like he could be the 1b to Julio Jones. I mentioned in our NFC preview that I didn’t take the bait on Ridley as a 3rd/4th round pick, but Week 1 makes me wish I did. Fortunately, I’ve been sitting on a few of his cards and hope that the breakout will continue.

Clyde Edwards-Helaire – CEH would be in the Top 5 if he didn’t already have a TON of smoke behind him. His card prices are already ridiculous and his cost on draft day was a Top 8 pick. Fortunately for those who made this invest both in cardboard and fantasy football, he looked fantastic in the season opener. The only downside to his game looks to be his inability to punch it in from the goal line. We will see if he can get creative when trying to hammer it in and boost his value even more.

Corey Davis – The Titans played the late game so I wasn’t able to stay up and see Corey Davis finish with over 100 yards for the first time since Week 10 of 2018, but I did see the sales the next morning. The card game never sleeps!

Benny Snell – Another favorite waiver wire pick up. Snell was getting a ton of good pub in camp. Reporters said he slimmed down and looked fast. After being pressed into duty on Monday Night Football, you could see that on the field. If Conner misses any time, or lost his job Monday night, Snell is an RB2 with RB1 upside

JK Dobbins – Dobbins is clearly in a split with incumbent RB Mark Ingram, but he was the RB to find paydirt twice on Sunday. While that won’t be the split every week, it is great for collecting and fantasy football to see that Dobbins has the skillset to get in the end zone.

Aaron Rodgers – Rodgers has the 2nd most impressive Sunday for a QB, but his card value is pretty much firm where it is. It would take a lot to boost him much higher than where is at, but if he and the Packers continue to dominate, we may see the major uptick in value.

Nyheim Hines – We talked about his extensively in the Week 2 Waiver Wire article, but I think Nyheim Hines is the next Austin Ekeler. He will be a fantasy breakout as long as he can stay healthy. Yes, the Colts have Jonathan Taylor, but Hines’ skill set as a pass catcher is perfect for QB Philip Rivers. The only difference between Hines and Ekeler is Hines already has a ton of rookie autographs in the market from almost every set, while Ekeler only had a rookie autograph in 2017 Contenders. The glut of Hines autos will lower the ceiling on his value a bit if he does in fact break out.

1. Sam Darnold – I don’t get why people were pumping money into Sam Darnold. Back in late August, his 2018 Prizm base rookie was pushing $70 raw. Today, you can probably get it for $20-$25 shipped and even that feels like too much. No, I am not overreacting over a poor Week 1 from Darnold and the Jets. I am basing this off of two things. Adam Gase and the Jets weapons. If you become a regular reader of our card collecting and fantasy football advice, you’ll notice there is a common denominator in some of my writings…and that is Adam Gase being a detriment to your fantasy football team and players you want to invest in. Devante Parker was a bust his first three seasons in Miami. Once Gase left, he became a thousand yard receiver. Kenyan Drake couldn’t put together a fully productive season in Miami. He gets traded to Arizona and turns into a productive Top 10 fantasy RB. The list goes on and it will continue to go on as long as Gase is an NFL head coach. OK now back to the weapons. Where is the upside in New York? How can Darnold put up Lamar Jackson or Patrick Mahomes numbers? Spoiler alert: he can’t. Jamison Crowder and Chris Herndon aren’t Tyreek Hill and Travis Kelce. Add to the fact that Darnold isn’t a mobile QB and I see no way he can win a fantasy title or give you a return on investment. Just because Gary Vee was trying to pump the tires of his favorite team’s QB doesn’t mean you should spend money on the player. OK. I spent waaaay more time writing about Darnold than I though I would. Let’s carry on.

2. Baker Mayfield/Odell Beckham Jr.- Oh boy. Where do I begin? I don’t know what to think about this team. I went in on a bunch of Baker Mayfield rookie autos this off season thinking that the Browns would turn things around under new HC Kevin Stefanski, but Sunday was the same old Browns. On Baker’s first pass he threw an interception and Odell Beckham Jr. made a few key drops. It’s too early to throw dirt on the grave of the Browns and Baker/OBJ, but I will not be making another Baker purchases for a little bit.

3. Anthony Gibson- Gibson was the hottest name coming out of the offseason. How did the fleet footed WR turned RB (that’s key) reward his fantasy owners and card collectors? A measly 44 total yards. I took the bait in one fantasy football league and drafted him as my RB3/FLEX, but fortunately I sold high on his RPA that I pulled from a wildly overpriced box of 2020 Certified. We should have seen this rough start coming since he is switching positions. Let’s see if he can earn a larger role in a Redskins backfield devoid of talent.

4. Rob Gronkowski- This one hurts because I love Rob Gronkowski, but I didn’t see it happening with him in 2020 even with a year off to let his body rest. I watched his whole career in New England and sadly saw his explosiveness get sapped from his body thanks to a ton of injuries. I also saw some clips of him at practice and thought that he looked stiffer than Frankenstein trying to run a curl. I’m not out on Tom Brady in Tampa, but I’m definitely out on Gronk as a Buc.

5. Cam Akers- I may be a little harsh on the rookie putting him here since HC Sean McVay said Malcolm Brown would be the starter, but the game was on national TV and Akers was running tentatively. Not great when there are a lot of eyes on you, but I think he will eventually turn it around. Now may be a good time to snap up some of his rookies and autos.

Mark Ingram – This is more fantasy related since Ingram has never had a ton of hobby love, but JK Dobbins is a real hit to Ingram’s fantasy value if there are basically working to a split.

Michael Thomas – Thomas helped blaze a trail for WRs to be respected in the hobby and put up record breaking numbers in 2019. This turned into him being a Top 5 fantasy pick in 2020. Unfortunately, MT suffered a high ankle sprain in the win over the Bucs which will linger for a while. I’m not expecting the gaudy numbers we saw in 2019.

George Kittle – Jimmy Garoppolo left Kittle out to dry and it turned into a helmet into the TE;s knee that was a clear hyperextension. Kittle said he’s fine, but much like Thomas’ ankle injury, this could be a season long hindrance If he continues to play on it. Joe Mixon- I’m so happy I didn’t draft Mixon this year. His price was that of a late 1st round pick and I don’t see how he returns that value behind a bad Bengals O-Line. Especially with Gio Bernard seeing 5 targets out of the backfield. James Conner- Was it an ankle injury or ineffectiveness that got Conner benched? We probably won’t know, but the trend of Conner getting banged up continues.

We would love to hear your picks message us with your players, maybe they’ll make the list next week.