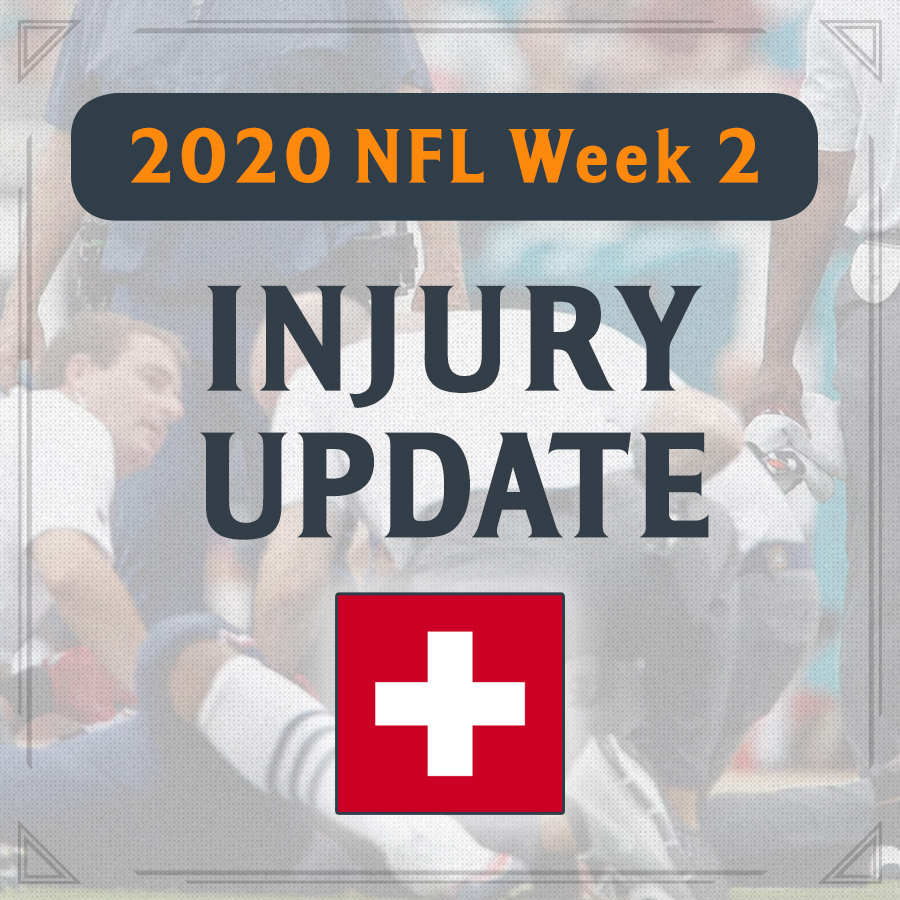 High Ankle Sprain
Thomas is likely to miss a few weeks, but the Saints are yet to put him on the IR, which means he would be out for at least 3 weeks if placed on it, so this may only be a 1-2 weeks absence. With that being said, a high ankle sprain SUCKS for a player who relies on precise route running. This could be an issue that could hamper him all season.

TE Jared Cook could see double digit targets with Thomas out and WRs Emmanuel Sanders and Tre’Quan Smith will be relied upon more. This hurts Drew Brees’ potential at high end QB1 production with his Alpha WR1 out for a few weeks and potentially limited all season

OUT  Concussion
Woof. This was a mid week injury that popped up out of nowhere. According to @ProFootballDoc David J. Chao “He (Godwin) reportedly had no symptoms on the sidelines or on Monday or Tuesday but reported to the facility today (Wednesday) with some symptoms and the Bucs are doing the right thing by being cautious. When there are delayed onset symptoms, it means the clearance to return to play will be delayed as well.”
Generally, if a player is diagnosed and placed into the concussion protocol on or around Sunday, they have enough time to get out of the protocol by game time Sunday (if it isn’t serious of course), but with Godwin going into the protocol Wednesday, he ran out of time to get cleared for Sunday. WR Scotty Miller will be the WR2 and Justin Watson will roam the slot come Sunday (possibly longer).

OUT  Knee
Brown is OUT Sunday with a bone bruise on his knee. The worst part about this? It could be a multi week injury for 2020’s breakout star. Not great for those who drafted him in the 3rd round of fantasy drafts. WRs Corey Davis, Adam Humphries and TE Jonnu Smith all get bumps, while I expect RB Derrick Henry to get 25+ touches again.

OUT  Strained Hamstring
Golladay missed the Week 1 loss to the Bears with a strained hamstring and is OUT for Week 2. In his absence, WR Danny Amendola led the team with 81 receiving yards, but it was Quintez Cephus who was the most targeted receiver (10 TGTS). This WR group will be hard to gauge with Golladay out Week 2 against Green Bay, but you’ll can feel somewhat comfortable starting any of Amendola, Cephus and Marvin Jones and expect them to get 5-7 catches. Stafford will spread the love. Even if Golladay suited up, I am still deploying my 2020 breakout TJ Hockenson as a TE1.

OUT  Knee Sprain
Kittle took a hit to the knee when QB Jimmy Garoppolo hung him out to dry with a high pass. Adam Schefter reported that will not play Sunday. Go try to grab backup TE Jordan Reed because I have no idea who will be catching the ball on San Francisco. It’ll be the Raheem Mostert show and I expect him to touch the ball 20+ times.

Hamstring
When Miles Sanders was ruled out on Sunday with a strained hamstring, many went rushing to their phone/computer to see if Boston Scott was available and immediately placed him into their starting lineups as a RB2 with upside. Unfortunately for those owners, Scott did a whole bunch of nothing (as did the Eagles offense in the 2nd half), but Week 2 is a different story. Miles Sanders should be suiting up along with OL Lane Johnson, so hopefully Sanders can deliver RB1 production on Sunday.

Ankle
I likes Steelers RB2 Benny Snell coming into the season because Conner has failed to stay on the field and I thought Snell would take the job sooner rather than later, but I didn’t expect Conner to get hurt and Snell to excel Week 1. Conner will be active for the Steelers Week 2 tilt against the Broncos, but it could still be the Benny show against a Denver team that just allowed Derrick Henry to rush for 113 yards. I like Snell as a middle of the road RB2 and wouldn’t be surprised if the Steelers didn’t manage James Conenrs’ reps to limit any reaggravation of the ankle.

Hamstring
Parker left Week 1’s game against the Patriots with the balky hamstring he was nursing in training camp, but looks like he will be on track to play Week 2 against the Bills. In a tough match up against Tre’Davious White, it may be best to fade Parker if you can this week.

IR – Hamstring
Sent to the new IR for hopefully 3 games, the Le’Veon Bell saga continues in New York. The Jets O-Line is dreadful so I’d only suggest picking up Frank Gore if you’re desperate at RB.

Shoulder
Sutton is highly questionable and looking like he will be a game time decision. If he is forced to miss Week 2, rookie WR Jerry Jeudy and second year TE gets a bump but will be facing a tough Steelers secondary so temper your expectations.

Turf Toe
Even if he is able to play through the injury (highly unlikely) you cannot expect Lindsay to be all that effective with this injury. Melvin Gordon will get a huge bump over the next few weeks and Royce Freeman could see some more run as long as Lindsay is inactive/banged up.

IR – Foot
Recovering from foot surgery to fix a Jones Fracture, this is the best thing to ensure Deebo doesn’t rush back. Hopefully he will be ready to rock Week 4 and can put up WR2 production.

OUT  Hamstring
The Jets slot receiver is out for Sunday’s tilt against the 49ers with a strained hamstring. He missed Thursday’s practice and is didn’t practice Friday. WR Breshad Perriman and TE Chris Herndon look a little bit better as desperation plays, and WR Braxton Berrios will play the slot, but I wouldn’t be racing to the waiver wire for any of them. 49ers CB Richard Sherman is on the IR, but it’ll be a long day for QB Sam Bradford as San Francisco will likely be in his pocket early and often. I’m fading the Jets fantasy “options” this week.

Check back here on Sunday around 11 AM EST and we will have the final outcome whether a player is Active or Inactive. Good luck this week!